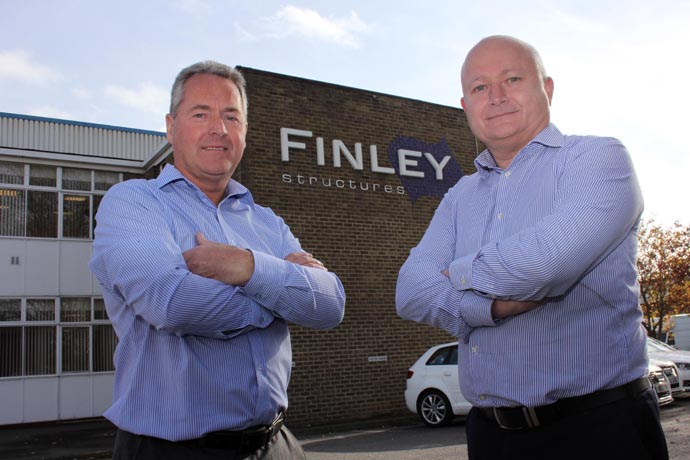 Jim admits to getting his “passion” back as he relishes the task of helping fast-growing Finley Structures to “the next level”.

“It’s a fantastic opportunity for me,” said the 53-year-old. “Finley Structures is a vibrant, growing firm with a glowing reputation in the industry and I want to help them achieve their ambitions.

“What has always struck me about Finley is that it’s a family-run firm, which says a lot these days. There’s a family atmosphere around the place and it’s well run – it’s a nice place to come to work.

“My ambition now is to help Finley Structures to a level where it’s fabricating between 250 and 350 tonnes of steel a week with controlled, structured expansion and establishing the firm as a major market force in the UK.

“I thoroughly enjoyed my time with Severfield Rowen, living through a number of major takeover deals and helping it through several transitional periods to establish it as a UK market-leader.

“But personally I needed a new motivation, and I’ve known John Finley for more than 20 years. I’m from Aycliffe and I’ve been hugely impressed by the strong but steady progress his company has made in recent years, particularly during difficult times.

Jim will sit directly between the Finley’s board of directors – parents John and Valerie and their children Julie and Gary – and the company’s management team.

This entry was posted onFriday, November 1st, 2013 at 2:23 pm and is filed under Latest News. You can follow any responses to this entry through the RSS 2.0 feed. You can leave a response, or trackback from your own site. Both comments and pings are currently closed.

Thank you for your kind words, we are thrilled to be celebrating 20 years and looking forward to the next 20. twitter.com/jwstumpy/statu…

Check out these fantastic sunny photos of The Spark in Newcastle we recently received! Progressing well with @WeAreMcAlpine #progress #Construction #Newcastle #steelfabrication pic.twitter.com/TFXvCkrNOm

We are thrilled to achieve ISO 3834-2 accreditation in preparation for it's mandatory requirement when working to NSSS 7th edition in Jan 2021 #steelfabrication #welding pic.twitter.com/xM1oGrjwiB

WOW! What a stunning photo we've received today of our Durham County Council New HQ site. If you look closely you'll see the magnificent Durham Cathedral in the background too! With @kierconstruct and @DurhamCouncil #constructionuk #steelfabrication #durham #lovecountydurham pic.twitter.com/1gb6XGOixZ